At its December 12 meeting Carnegie Council voted to forge a 20-year contract with the Andrew Carnegie Free Library.  The vote was unanimous.

The contract gives the Library stable and appropriate funding for the next 20 years, essentially making the Library viable for the first time in its 115-year history. 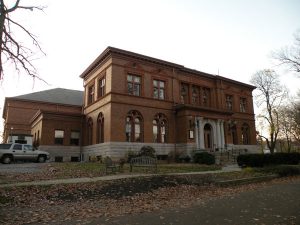 “Our beautiful Library is embedded in the history of this town,” said Council President Pat Catena.  “It has served Carnegie and its families very well since 1901.   As Council President, I could not preside over the possible closing of the Library.”

“Needless to say, we are ecstatic!” said ACFL&MH Board President Isabel Ford. “The Library has struggled financially since its inception.  Without Council stepping forward the way it did, our outlook was grim.  This is an example of a public/private partnership at its best.”

The Library was Andrew Carnegie’s legacy gift to the Borough that incorporated to take his name in 1894. Though he funded more than 2500 libraries around the world, the industrialist turned philanthropist only endowed five libraries.  In addition to the “Carnegie Carnegie,” those libraries in Dunfermline, Scotland (the first Carnegie Library in the world), Braddock (the first Carnegie Library in America), Homestead and Duquesne (sadly torn down).

The $100,000 with which Andrew Carnegie endowed his gift to Carnegie Borough came in the form of United States Steel bonds.  Interest from these bonds was intended to support Library operations.  It was not enough.  Andrew Carnegie supplemented his gift in 1903, then again in 1912.  He died in 1919.

After funding the ACFL, Carnegie never gave money for another library building unless its municipality agreed to buy the books and provide operating support.

“I am overwhelmed,” said ACFL&MH Executive Director Maggie Forbes.  “The Library has been on a remarkable journey since we launched the capital campaign in late 2003.  But restoration of our historic facility pales compared to the impact of what this contract means to Library services, programming and out community.”

Councilman Rick D’Loss said, “The restoration of the building has been stunning, but a beautiful building is useless if the doors are closed and locked. The Library still has to pay salaries and utility bills to be fully functional. That is in part a municipal responsibility.”

In late 2015 Allegheny County Library Association distributed a document stating that across the County municipal funding accounts for 47% of libraries’ operating budgets.  That number was 14% in Carnegie.   “We knew Borough funding was low compared to other libraries,” said Forbes, “but this was a wakeup call for us all.”

ACFL board and staff have been working closely with Council to stabilize funding ever since.

The Borough’s funding will be used for Library operations only. Unlike a public library, the ACFL&MH’s acoustically superb Music Hall is learning to generate revenue.  Its last performance, Richie Cole’s Orchestra’s A Very Carnegie Christmas, drew a near capacity audience.

Library Director Diane Klinefelter promised, “We will live up to the Borough’s faith in this Library.”  She wants to be sure that this new funding translates to services the community perceives and values.

Perhaps Councilman Mike Sarsfield summed it up best.  “I’ve always said, as the Library goes so goes the town.”
The Andrew Carnegie Free Library board and staff look forward to going forward with Carnegie for a long time to come.

ACLA and its member libraries appreciate the enduring support of the Allegheny County Regional District (RAD).